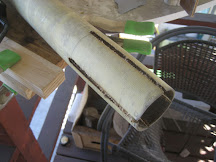 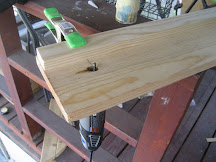 The disposable L1 rocket project was shelved about 4 months ago, mostly due to summer wandering, and being too broke to prepare for Burning Man and pursue EX concurrently. But now that the Burn is over, and a steadier source of income has been secured, it’s back to business.

After glassing the fins to the motor mount, and adding several wraps to the body tube, the trick was going to be cutting the fin slots. I rigged up a DIY router table for all of 8 dollars, which consisted of a 3/4″ nut epoxied to a 1×6 board with a hole drilled in it. The nut fit the threads on my Dremel tool well enough to work. I spring-clipped a piece of Select Pine from Home Depot to the base to act as a guide. The cuts did not end up as straight as I would have liked, however, due to my guide clip being positioned on the end of the tube that was being cut (http://en.wikipedia.org/wiki/Stupidity). With each new cut, the end of the tube collapsed a little more, allowing it to roll, so by the 4th cut the cumulative error had precluded the fins interfacing properly with the slots. I had to open up the 3rd and 4th slots up by hand to make them fit.

I managed to break the tip off of the nose cone while sanding it, again — JB Weld is not ideal for forming nose cone tips. What finally worked was mixing chopped fiberglass with 5 minute epoxy and forming it to the tip of the cone with rolled up printer paper. The result should be nothing less than lethal on a high speed ballistic trajectory.*

*Not a stated design goal.

Tweet
This entry was posted in Rocketry. Bookmark the permalink.