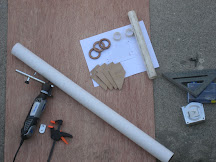 If the military built their rockets to your specs they could reuse them after detonating their warheads.-Matt Dolan

And so this new project goes off track. Matt and I have always had a penchant for over-building things — ever since our potato-cannon days almost fifteen years ago. And I think this has been entirely prudent, given our fascination with things that can be dangerous in the event of a structural failure. It also stems from the farmer mentality of “build it right the first time, and you won’t have to build it again.” As true of barns as of anything else. I will also add to that adage, “and whatever it is, you might someday need to use it to hoist an engine out of a truck.” This explains our Two-Ton Pullup Bar from college.

In this case, however, the design goal was specifically that the vehicle be cheap and easy to build. As it’s purpose would be to test less-than-proven rocket motors, I did not want to be heartbroken (nor out very much money) if it were torn to shreds. But once I start applying fiberglass to things, I just can’t seem to stop.

The nose cone had to be made out of fiberglass, as I, non lathe-owning citizen that I am, had no cheaper or less time consuming way to fabricate one.
The body was to be made out of a 2-inch cardboard mailer tube from the post office with nothing else done to it. But what the hell… as long as you have all the epoxy out, you might as well strengthen that up.
AND of course, if I’m going to glass the body tube, I’m going to have to glass the fins.
And pretty soon, my quasi-disposable test rocket doubles in price, and becomes something I could use to qualify L1. Which of course I know I’m going to do because, hey I’ve got the rocket. Why not? And in the desert heat I will talk myself into spending more money that I don’t have.

Tweet
This entry was posted in Rocketry. Bookmark the permalink.